Two men shot — one of them seven times — outside Bronx bodega A trigger-happy gunman unleashed a barrage of bullets at two men standing outside a Bronx bodega Tuesday, hitting one of them seven times and the other twice. Both victims had by Tuesday night survived the alarming hail of bullets, cops said. The men, 21 and 37, were standing outside the Los Primos Deli Grocery at W. 165th St. and Woodycrest Ave. in Highbridge when the assailant emerged from between a parked van and SUV and started shooting. “There were shots. He was screaming and laying on the floor face-up, bleeding,” witness Freddy Perdomo, 55, said of the younger victim, who was hit seven times. “I could see two of his stomach wounds. The (shooter) had a gun in his hand, and he was running down the street…. He was holding a big black gun.” Medics took both men to Lincoln Hospital. The shooter is described as a Black man in a white t-shirt, with a scruffy beard and a bag stretched across his torso. Cops have not yet made an arrest in the shooting. 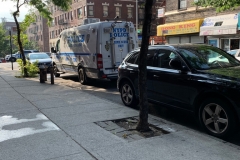 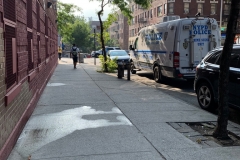 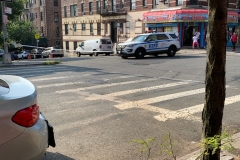 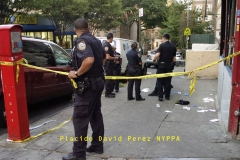 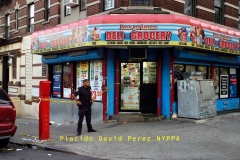