Friday, September 10, 2021: The Coast Guard held a 20th remembrance ceremony at the overlook in Ft Wadsworth at 8 am this morning. They lost four of their own on 9/11: Vincent G Danz, Jeffery A Palazzo, Gilbert F Granados; and Gregory R Sikorsky. Three were Reservists and one an Auxiliary member of the USCG.
The ceremony began with a muster; followed by the arrival of officials. There was an observation of morning colors and two USCG aircraft performed a flyover. The invocation was read by Captain Thomas J Walcott, Chaplain of the USCG; a welcome was rendered by Captain Zeita Merchant, Commander, USCG Sector Nre York. Remarks were by Rear Admiral Michael H Day; and an introduction by Rear Admiral Thomas Jj Allan Jr . Remarks were given by Admiral Karl L. Schultz, Commandant, USCG. Taps followed the service. 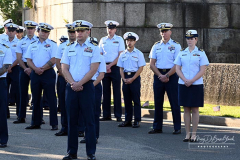 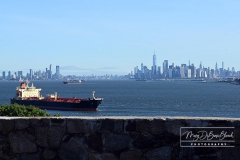 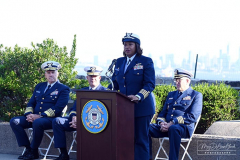 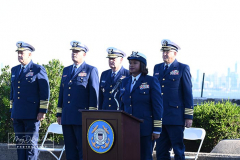 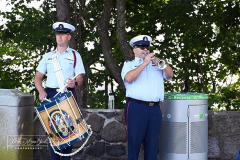 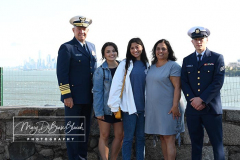